This isn’t quite a Rant, which is usually directed at some faulty system or bureaucracy. Nor do I have any Silver Linings to share here. Instead I have Mom Guilt. Soul searching, gut wrenching Mom Guilt to lay bare here in a blog. Judge away, I certainly do.

I was diagnosed with MCS before I had children. In fact, we were fairly certain we would not be able to have children. And when we learned it was possible, I was truly torn between elation and terror. Recovering from my initial exposure and health crisis enough to have a life, a life with children, was a huge second chance of a blessing. But, like with all things MCS, we had more questions than answers. How much of my condition was genetic predisposition such that my children might have the same potential for illness? At some point in their life, might they have an exposure that would trigger the same condition for them?

My first child, the Man Cub, was a healthy pregnancy and home birth. He has been largely healthy; he has more inhaled allergies than the average kid but nothing dangerous and now that he has reached the old age of 11, his immune system seems to be normal. Though he is not an average child in any other way, I will resist the opportunity to brag about him here because that is off topic. My second child, my daughter Lelu, was complicated from the beginning. I was reluctant to get pregnant again; mothering the infant Man Cub was enough of a challenge with my MCS limits and I could not imagine adding another into the mix. But she was determined to get here – that’s the only way I can describe it. It happened against my better judgement and with some sense of urgency that had nothing to do with me.

The purple patch, for when she is feeling royal.

It was a high risk pregnancy, a total placenta previa. Which landed us in the hospital many times and on total bed rest. She was born 6 weeks early in a very traumatic emergency c-section. She was in the NICU for two weeks. She was born allergic to dairy, nuts, wheat, eggs – the serious kind where we carried around an Epipen. By the time she was 4, she had outgrown the wheat allergy and her reaction to other foods was decreasing. That was about the time we realized she had strabismus (crossed eyes) and amblyopia (a lazy eye). She would need glasses and years of patching (thus the multiple patch options) and drops and therapy for the lazy eye. Soon thereafter we realized her adorable lisp was a result of tongue problems and she had to start speech therapy. She cannot catch a damn break, this kid.

The pink patch, for when she is feeling pretty.

Obviously if she had been born first, the guilt would have made her an only child because the child has a lot of inherited problems. Alright, the eyesight I can probably blame on her paternal grandfather. But the food allergies – that’s all me. The premature thing – well that’s not technically my fault I suppose, but hell it was my uterus. I don’t know about the tongue – but what does it matter? The child has more to deal with than she should and who else is ultimately responsible, other than her mother!

The home-made pirate patch, for when she is feeling Argh!

Last winter, my daughter had an accidental exposure to a know food allergen. And now we come to the biggest Mom Guilt ever, because the other stuff was just the gene pool risk we all play and she came up with a losing hand. This time I actively screwed up. Last Christmas we were at my sister-in-law’s place for gift opening. They are lovely about what is a very complicated day for the MCS mom; we open windows and everybody wraps presents in paper grocery bags. But there is no escaping the outgassing of gifts for a large family. So I was in the worst of the cognitive dysfunction phase of a reaction. I was slurring my words, and losing depth perception and certainly not thinking clearly. And I said yes, you can eat those crackers. She couldn’t, she shouldn’t have. There was snot and swelling and rashes and a lot of vomiting.

EpiPen, in her mom’s purse.

After that, her GI function and immune system spiraled out of control. Traditional food allergy theory does not account for the fall out we had from one exposure incident. She went to school only a handful of days between Feb and April. She stopped eating and she was in pain and lethargic to the point that I didn’t recognize her. We spent months seeing allergists and pediatric gastroenterologists and pediatricians for her tummy problems. We did lots of bloodwork and stool samples. We politely declined an upper endoscopy since they couldn’t adequately explain the need for it. I finally gave up on those doctors and followed my instinct, which told me that even if she wasn’t allergic (in an IgE mediated way) to gluten she might be sensitive or intolerant to it (through other inflammation mechanisms). She has been gluten and soy free for about 7 months now and is free of chronic pain. I have my smart, energetic child back. There is still some dysfunction and the pain still flares up for a few days a month. We think these lingering problems may be a hidden food sensitivity or an underlying infection/parasite that could have been the original insult, leading to the dramatic increase in her food sensitivities last winter. 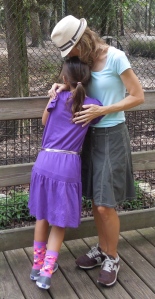 Tilted Mom and her tall Lelu.

To further explain the Mom Guilt, you have to understand that all the women in my family have food intolerances and GI dysfunction that worsen as we age. Regardless of how fabulous our diet, exercise and overall lifestyle is…we have an Achilles gut. In fact, my food allergies and GI problems started spreading again a few months before my daughter’s did. So now we see doctors together. And rotate our foods together and take our fish oil and probiotics together. “I am so glad you’re my mommy” she said one evening after a particularly painful tummy day, “because you know exactly how I feel and what it’s like for me”. Yes, you poor trusting soul, I know what it’s like because I made you this way! Not on purpose, but still. I did it. I knew it was a risk and yet here you are. In pain and limited. That is epic Mom Guilt and I have no Silver Lining for it. I can only trust in her resilience and my determination. I’ll keep you posted.